Previous Next
2019 IMO Award for Exceptional Bravery at Sea – Nominations

Please find below a request from the IMO for submissions for its 2019 Exceptional Bravery at Sea Award.

I am personally aware of a number of selfless acts crews from our various member companies undertake each year to save souls from the perils of the sea.

Since the core value of Interferry and the ferry industry is the safety of our passengers and crew, I would encourage as many of you as possible to to complete the application form (as described in the links below) which Interferry would be then pleased to submit to the IMO on your behalf.

IMO Award for Exceptional Bravery at Sea – Call for Nominations

The Secretary-General of the International Maritime Organization has the honour to invite nominations for candidates for the 2019 IMO Award for Exceptional Bravery at Sea. The Award Guidelines have been amended in order to widen the spectrum of the nomination criteria to include exceptional acts of seamanship, as well as bravery.

Nominations for the Award may be made by: United Nations Member States; intergovernmental organizations; and/or non-governmental international organizations in consultative status with IMO. The recipient of the Award will be presented with a medal, which will be accompanied by a certificate citing the act of exceptional bravery performed.

Nominations of candidates to be considered for the 2019 Award (for actions performed during the period 1 March 2018 to 28 February 2019) should be sent as soon as possible in order to reach IMO by no later than 15 April 2019.

The nomination form can be found here (Word doc). 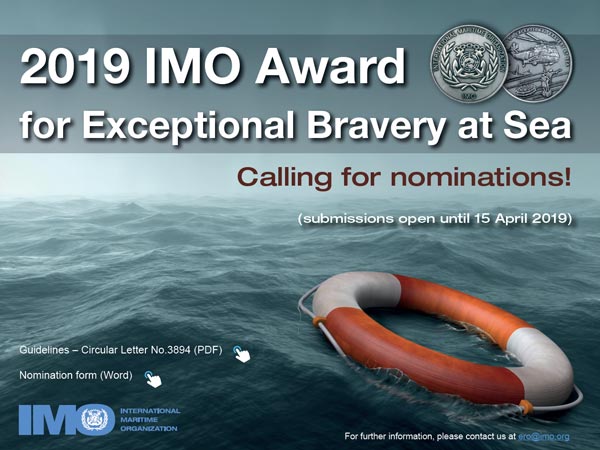