Autonomous vessels, nuclear power and data-fuelled personalisation of the passenger experience are among the industry-transforming objectives that will be showcased in London next month when global trade association Interferry dedicates its 44th annual conference to the theme of large-scale innovation.
The association’s call for papers stressed that the conference focus would be on initiatives offering step change rather than incremental improvements. “The overwhelming response confirmed that the ferry community is drawing ever closer to the next big things on the horizon,” says CEO Mike Corrigan. “Our speakers program will explore technical, operational and commercial innovations with revolutionary potential that will help delegates future-proof their businesses.”

Delegate bookings are already close to capacity after the program and venue attracted a 30% increase on the previous best for early bird registration. “The combination of conference content and London’s predominant position among world maritime centres leads us to expect record attendance for the event,” adds Corrigan.

In the first of two opening keynote presentations, futurist hi-tech writer David Rowan will use insights from his recent book – Non-Bullshit Innovation: Radical Ideas from the World’s Smartest Minds – to suggest how the ferry industry can build new revenue streams and attract talent. Guy Platten, head of the International Chamber of Shipping, will then give his take on where ferries fit in shipping’s future.

Among 19 sessions over two days, they will be followed by speakers from an international line-up of operators and suppliers. Topics include transformation case studies from various-sized ferry companies; progress on zero-emissions and automated ferries; shipyard thinking on improving the construction process; terminal berthing and bridge navigation technologies; advances in IT and satellite telecommunications networks; customer service innovations involving terminal interfaces, billing systems and the Internet; and an analytics-based risk model providing a paradigm shift for insurance cover.

Each day of the October 7-8 program will end with discussion panels in which ferry company CEO’s from Australia, Canada, Greece, Sweden, Thailand, the UK and the US will debate their optimal approach to the opportunities arising from ever-increasing technological and customer demands.

Based at the Thames-side InterContinental London – The O2 hotel, the 2019 Interferry conference is the business core of an event running from October 5-9. An extensive networking and social calendar includes a reception on renowned 1869-built tea clipper Cutty Sark and a closing dinner in the Painted Hall at the Old Royal Naval College.

Towards autonomy and zero emissions

The path to vessel intelligence systems will be traced in a presentation by Michael G. Johnson, founder of autonomous control & perception specialist Sea Machines, and ZF Marine engineering manager Drew Orvieto. They will explain how advances in digital computing, sensors, data analysis and data communication are giving rise to intelligent machines that can digitally perceive and measure complex situations – and ultimately lead to machines taking responsibility in those areas where humans tend to fail. The necessary operational performance would be achieved by deploying the machines where they can control multiple data streams to provide dynamic vessel control and better information to the commanding crew.

Tom Walters, a partner in the London office of international law firm HFW, will follow up with an outline of the potential legal, insurance and regulatory ramifications of operating vessels with minimal human interaction – taking note that the global autonomous shipping industry is predicted to grow into a $136 billion industry by 2030.

Input on reducing emissions will include an update from Norled, the second largest ro-pax ferry operator in Norway and the world’s fourth largest passenger-only fast ferry operator. The company has been extending its fleet electrification after introducing MF Ampere, the world’s first zero-emission ferry, in 2015. Now it is aiming significantly further with plans to launch one of the world’s first hydrogen-fuelled ferries – with capacity for 80 cars and 299 passengers – in 2021. In addition, Norled is one of five Norwegian partners in the ZeFF (Zero Emission Fast Ferry) project, which by 2022 aims to introduce hydrogen-powered vessels with space for 100-300 passengers and service speeds of 25-45 knots.

Speakers in a shipbuilding innovation session include Hakan Enlund, a vice-president at Finland’s Rauma Marine Constructions, who will describe the yard’s arrangement with an independent laboratory to simulate the interaction between components and systems from different suppliers. The objective is to identify weaknesses and malfunctions in integration to minimise the risk of unpredictable challenges during newbuild sea trials.

Some 88% of people prefer buying from companies that offer personalised experiences – and 93% of such companies will see an uplift in conversion rates – according to recent research that will be quoted by Nikolay Malyarov, executive VP and chief content officer at PressReader, which provides digital access to more than 7,000 of the world’s most popular newspapers and magazines. Arguing that mobile is a huge enabler of personalised amenities but often constrained by on-board connectivity costs, he will explain innovative technologies that address Internet limitations, with references both from the travel sector and other consumer-focused industries.

Ways of maximising the use of data collected throughout the booking and travel process will be explored by Anders Rundberg, founder and CEO of passenger-facing IT systems supplier Carus. His presentation will show how new technology can personalise the ferry travel experience by enabling operators to act on their knowledge of customer preferences and build revenue by adjusting their promotional and communications strategy during the journey. 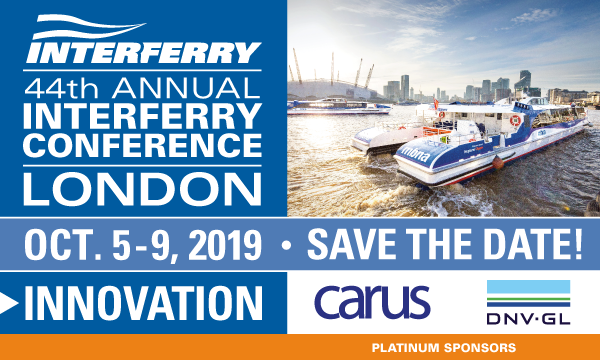